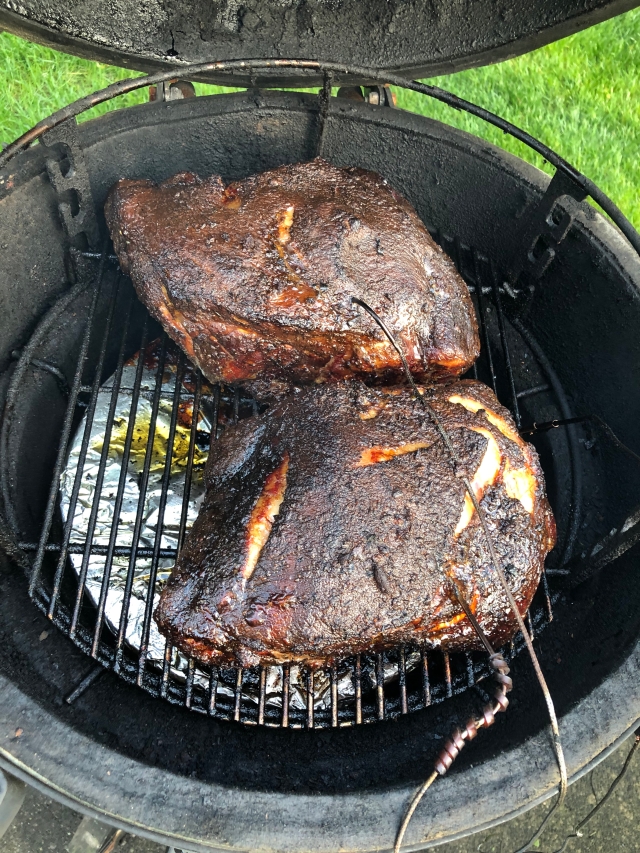 There are 104 people who say they are coming to my house Saturday for the 10th and final Salute To Meat, and these two pork butts will not satisfy them.

They are only the start of the last push. Two more will go on when they come off late Thursday morning, because my Large Big Green Egg will not accommodate all of the 35 pounds of pork shoulder that I will pull and my wife, Janet, will serve on King’s Hawaiian Rolls with a little coleslaw. Those rolls are smaller than slider-sized, perfect for two bites.

I’m saucing the pulled pork with a traditional North Carolina vinegar sauce, for which the very easy recipe is here: http://www.nakedwhiz.com/elder.htm#rubs. If you follow the link you’ll also be treated to an exhaustive and very entertaining treatise on the smoking of the divine butt.

Anyway, the next two shoulders will come off Friday morning and then the two Prime briskets, which will weigh in at about 35 pounds after trimming, have to go on the Egg, and I hope they will be done by 7 or 8 a.m. on Saturday. If they are not, I have a couple of Plan Bs.

Also on the menu:

So with the pork butt and brisket, call it 180 pounds of meat, give or take. Of course, there is a lot of bone in the ribs, but I think we’ll have enough.

I have a Pit Barrel Cooker, and plan to smoke eight racks of ribs on it Saturday, the other four on the Egg if the briskets are done early enough to give me a six-hour window before the lamb and steaks have to go on. If they aren’t, I’ll go two rounds on the PBC, pulling the first set off a little early to hold, then finishing them on the grill when I’m ready to serve.

Today I’m making the gochujang sauce for the pork belly, which I’ll cook tomorrow and Janet will crisp and serve on little tortillas cut from Mission Soft Flour Tortillas. The sauce recipe, which was intended for Korean fried chicken but is fabulous with pork, is here: https://www.seriouseats.com/recipes/2012/10/sweet-and-spicy-chili-sauce-korean-fried-chicken-recipe.html.

I’m also picking up the beer, wine and soda and the perishables for the sides. There will inevitably be some stuff I forget, and that I’ll grab Saturday morning when I pick up the baguettes for the crostini and the ice for the coolers.

So far we seem to have avoided last year’s excitement, when our freezer failed while we were on vacation and all the meat for the party rotted inside it, and a tree on our front lawn got hit by lightning the night before the event and nearly took out my car parked on the street.

But it’s a good reminder that anything can happen, especially when you’re smoking brisket and cooking for more people than attended your wedding, and so it is well to keep one’s knees loose.