This could end badly

I’m thinking. What is it that goes before the fall? Oh, yes. Pride.

Exhibit A as to my current discomfort, may it please the Court: 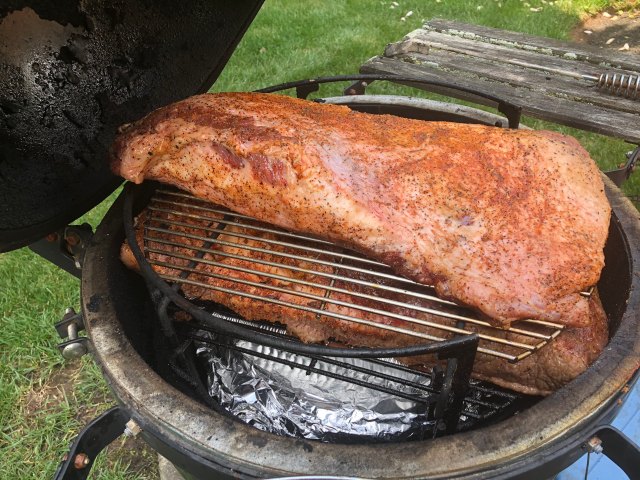 That’s two, 15-pounder briskets that I’ve trimmed as well as I can, at the beginning of our cook at 3 p.m. The top one is still a little cold; not quite defrosted in the point. They don’t need to come off for 22 hours, but still…

I’d frozen them and took them out to defrost last Sunday. But here it is Friday and the top one was still very cold in the point. More worrisome than anything is the possibility that they’ll drip beyond the drip pan and flame up, which will turn them acrid. They went on at 3 p.m. and don’t have to come off until 1 p.m. tomorrow, and I could arrange things so they could even go longer.

A few years ago I tried to cook two 18-pounders that I hadn’t trimmed very much or very well. They went up in a beefy blaze of humiliation in the middle of the night and I couldn’t serve them.

I’m hoping these guys do better for me.

On the other hand, the pork belly seems to have turned out well. 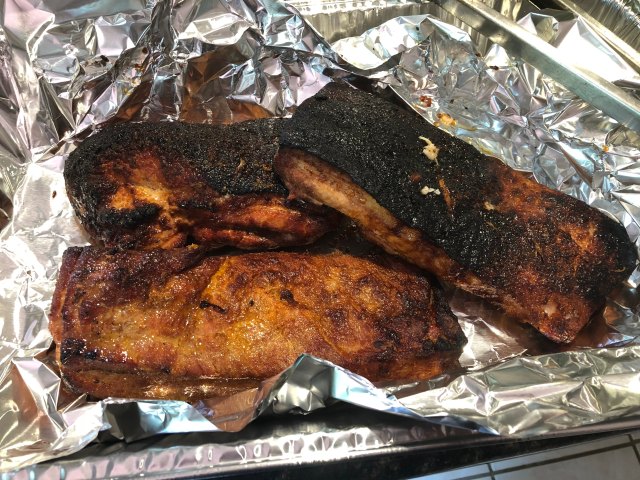 Three of the four pieces of a 10-pound pork belly I roasted on the Egg for tomorrow’s Salute to Meat — one more was still on the smoker. It rendered down to about 7 pounds. We’re going to cut them into bite-sized chunks after warming them tomorrow, and serve them in Scoops corn chips with a dab of barbecue sauce at the bottom.

The bacon, pastrami, pork belly and pulled pork are done and in the fridge, waiting for their final prep tomorrow.

Still ahead, after the briskets, are the spare ribs, lamb, steak and kielbasa.

This entry was posted in Salute to Meat 2018 and tagged Barbecue, Beef, Big Green Egg, food, Meat. Bookmark the permalink.