Meat, We Salute You

At the 2018 Salute to Meat, we had 71 guests, served 130 pounds of meat — some of which we wrapped and sent home with people — lovely music and a great time.

We also had the help of more than a half-dozen wonderful friends who helped serve food, set up and move things around the yard and sacrificed some of their own good time.

The kitchen work went the way things go every year, me running out to the smoker and cutting things in the kitchen, and I didn’t get to join the party until all the food had been served.

I remember a lot of meat, but also a lot of smiling faces and lovely compliments. The sky cleared during the afternoon after a long, dreary week of rain, and the weather was perfect.

It was a little tense, running out one course after another. But Janet and our friends Becky, Madonna, Sue, Donna and Sally ran assembly lines putting all the ingredients together for service on trays they carried. Everything except the brisket went out in finger-food portions, just a bite or two. I cut the brisket as people came into the kitchen for it, to keep it from drying out. 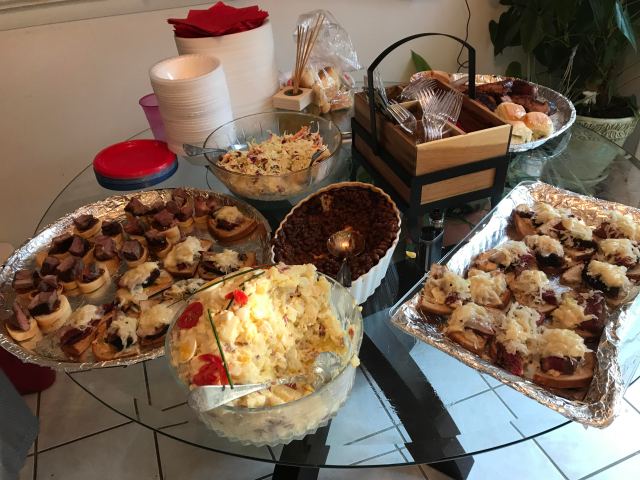 These are the mini pastrami Reubens and the crostinis with steak and caramelized onions and blue cheese, back in the kitchen for people to pick at. Also on the table are Janet’s potato salad, beans and coleslaw.

I was least happy with the brisket, which was still pretty good. Both briskets came to a very thin end at the flat section, and I should have trimmed it off, perhaps grinding it for hamburger or sausage. After its long smoke that portion was overcooked and dry; possibly OK for hash, but maybe not much else.

It was like dust on a diamond, though. People stayed long after dark, talking and drinking, and the guests made the party. They mingled, talked to people they didn’t know, made friends. Every single guest was lovely, helpful and appreciative, and good company for everyone around them.

It was the kind of party for which every host dreams, an Everest achieved not for its food but for its totality, the good time people all seemed to have.

This afternoon the house is pretty much cleaned, except for the rented tables and chairs that the company will collect Tuesday. I need to return a couple of borrowed coolers and when the trash and recycling get hauled away there will be little evidence that we had a party.

But we’ll have plenty of wonderful memories.

AND NOW, THE RECIPE FOR HOMEMADE PASTRAMI, PROBABLY THE BEST THING I SERVED

Janet made mini, open-faced Reubens from the pastrami. The Russian dressing is beneath the meat, then they got topped with sauerkraut and Swiss cheese before going under the broiler and then out to the guests.

I think everyone liked the pastrami the best. I had smoked it last Sunday and it took a long time to steam it from cold — about four hours — but it turned out really well. The recipe is from Serious Eats, and you can find it here: https://www.seriouseats.com/recipes/2011/10/barbecue-pastrami-recipe.html.

If you make it, do remember that the author has omitted the last and absolutely necessary step of steaming the meat to a temperature of 195-203 degrees. If you don’t, you’re going to get tough, dry meat. You can do as I did, smoke it several days in advance and then steam it when you serve. If you do that, it could take anywhere between two and four hours to steam, depending on its weight and shape.

Even if you’re going to serve it cold, I say you have to steam it first, and then wrap and chill it when it comes down to 140 or so.

If you’re going to serve it the same day you smoke it, when the internal temperature hits 165 you could wrap it tightly in heavy duty foil, maybe with a little water or beer, and then let it steam that way until it got to 200-203.  Let it rest, still wrapped — an hour isn’t too long —  and then you’re ready to cut it and serve to your grateful guests, or keep for yourself!